I'm an aging gavacha with enough ability left to use in service to the majesty of what remains of the Sonoran Borderlands and its people.  Butchered, mined, drained, laser-leveled and walled off, it manages to endure -- magnificent, mystical, 'full of sound' to those who listen.  In this searing corner of the universe, the threads of pre-history are woven with today and add to the wonder of this semi-tropical desert that exists nowhere else on earth.

I am also now old enough to have accumulated my own snapshot of history, and for what it's worth, feel compelled to share it. As a Euro-American (gnarly Scott mostly), I am aware that I am here under the stain of Manifest Destiny.  My home sits on Tohono O'odham/Hohokam ancestral land that was part of Mexico until 1854.  Arizona didn't become a state until 1912.  I am also now more educated about how being of Northern European ancestry entitles me to a status reserved for  Euro-Caucasian Americans— to the exclusion of all others.

Living near the border over the years has taught me a lifetime's worth of humanity and humility that I wouldn't have learned otherwise.  Border communities have centuries' old binational cultures and, contrary to nativist spin, remain among the safer communities in the country.  Moreover, we are intimately connected to Mexico and all Latin American countries even as brutality is now a way of life on both sides of the border.  Predatory economies will exist in our country and theirs for as long as profits grow and money flows.  The rays of light that persist are those of the ephemeral Human Spirit.  It never ceases to inspire me. 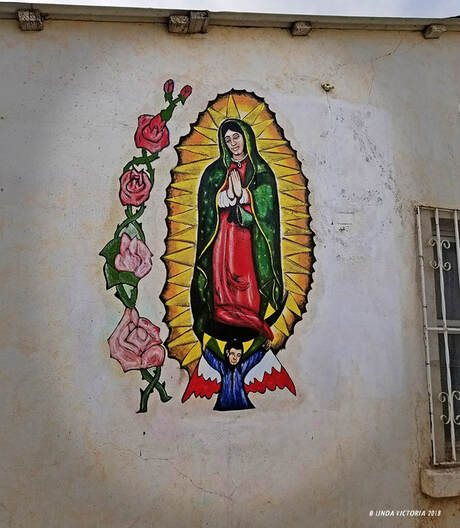 Nuestra Señora in an alley, Nogales MX
I was born and raised in a conservative Christian movement called Moral Re-Armament (MRA) headquartered on Mackinac Island, Michigan.  In 1964, a scion, Up With People, was conceived and established its headquarters in elegant MRA building in downtown Los Angeles.  Our family was relocated with it.  Although an iteration of the same Christian movement, its core commitment to worldwide racial and cultural diversity projected through youthful musical performances was an innovative approach for turbulent times.  Our family was comfortable in mixed and international company, and we ended up living in the melting pot harbor community of San Pedro.  During the turbulence of the 1960s, however, it was like living beneath a freight train rumbling overhead.

The ideological war over Viet Nam  had reduced hundreds of thousands of poor and minority Americans to gristle for the real war meat-grinder.  At high schools in Downtown and East LA, Chicano "riots" were in truth massive walk-outs over substandard education that fueled drop-outs and gangs.  (Concurrently, the LA Unified Teachers' Union struck for a full month.  They lost-- as did we students.)  The first Watts Riot in 1965 was nightmarish.  The smoke and flames lingered for weeks over the Harbor Freeway as we picked up friends for Sing-Out/UWP practice and shows.  While my parents discussed table grapes and Communist strikes, Cesar Chavez & Delores Huerta established the United Farm Workers Union through a gauntlet of push-backs from white power-brokers.

In MRA/Sing-Out/UWP, we were all about being a forward vision in the fight against Communism and immorality.  But what I saw  was blacks, Mexicans and hippie radicals targeted and brutalized by police with support from higher up.  It was mirrored in my high school and in community gang fights.  In the news however, city leaders were standing against crime and moral decay and UWP stood with them.  UWP gained a number of celebrity endorsements, corporate sponsors and considerable notoriety.  Our energetic performances were built to spread a positive challenge to anti-war protests and counter-culture movements, stuffed into an uber-patriotic "God loves everyone" envelope.  But at home I'd sing and play Joan Baez's "There But for Fortune" in the quiet of my room.

As the 70's rolled into the 80's, I was living it up and living a lie in New Mexico and forgot everything... but it seemed like the dust had settled and that we had finally evolved out of White Supremacy, Commie-hunts and the relentless stalking of minorities and their leaders.  It was part of the hypocritical fog of my upbringing and I couldn't care less.  The 90's would roll in before I could find my way out of my lie and the addictions and trauma that fed it.  New Mexico's 'enchanted' land was a lifeline.  "There but for fortune"...

Returning to Tucson (an old escape hatch in my youth), I remained relatively oblivious to the potency of the White Race Card until the 45th president slapped it on the table and called for action.  Through the rise of AZ's border militias and headline-grabbing sheriffs and politicians to Tea Party antagonism, I had seen only parts of the elephant.  Unknown to most including me--was how big money, big tech, and big egos with big visions were tapped into the main artery of the Angry Anglo-American Bubble.  Surveillance Capitalism took over the world and by 2016, the Great Restructuring of America was well underway.

Nonetheless, after the Jan 6th Insurrection, the eternal Human Spirit found its way to shine through a slender young black woman from Watts.
​The new dawn blooms as we free it
For there is always light,
if only we're brave enough to see it
If only we're brave enough to be it.
- The Hill We Climb, Amanda Gorman, American Youth Poet Laureate
So beautiful the vision.  And it is true that only through our collective will to climb and claw and cliff-hang can basic truths survive-- especially the one that declares, ALL people are created equal.  Only then  can there be liberty and justice for all... and I have to step back from it to get a higher perspective.

I see Truth much like the Human Spirit-- eternal, fleeting-- a spark everyone is born with that has the capacity to rise against all odds and light up others, or become twisted and smothered by manipulation, fear and greed.  In a country fueled by dark money, high tech, weapons and economic stratification, the obliteration of Truth is more insidious and total than ever.  Liberty & Justice are game pieces for the chosen and for those who can pay to play.  Meanwhile, Nature bats last and we are at the bottom of the 9th.  We cannot make honey without sharing in the fate of bees.  "We have met the enemy and it is us."

Still, the Human Spirit shines most brightly through the places it has been broken.  It can be seen in people helping one another in times of crisis.  And in survivors of violence and suffering who become wounded healers for others.  And in those risking life and limb to fight for their truth... some survive, some don't.  Truth is a double-edge sword.  To me, Truth is where God becomes visible.

In an age of deadly disinformation, living a life with truth in it is what matters most to me.  My family.  My dogs.  Wildlife in my yard, creative  projects around my  40's  hodgepodge house.  The Serenity Prayer.  Contributing to the preservation of land and community.

My spiritual home has always been in nature, and the sweet desert air is kind to my joints.  Arizona skies are as dramatic as the land and keeps me connected to our celestial address.   As Zuni farmer Jim Enote put it:  "We are part of a Collective Magnificence."  Indeed we are.  I am humbled to have been given the gift of experience on this tiny blue-green marble.  And, if one persists, the layers of Euro-dominion machismo begin to fall away and it's a wondrous welcome home.